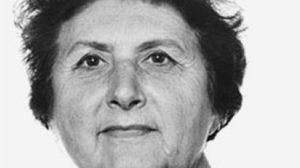 REFERENCE IN OCEANOGRAPHY. OCEANOGRAPHER BIOLOGIST. María Ángeles Alvariño was born in Ferrol in 1916. She moved to Madrid in 1934 to begin her studies in Natural Sciences at the University, the Civil War prevented her studies and could finish them by graduating in 1941. Seven years later she was the first woman admitted as a fellow to work at the Spanish Institute of Oceanography (IEO) in Madrid for her research quality and after two years of work she obtained her position as an oceanographer at the IEO in Vigo.

She worked at the Woods Hole Oceanographic Institute (Massachusetts). He obtained a grant from the British Council to conduct research at the Plymouth Laboratory. She got a position at the Scripps Institute of Oceanography and had her place as a Research Biologist at the renowned Southwest Fisheries Science Center (NOAA) (California).

On February 24, 2012, at the Armon Vigo Shipyard, the oceanographic ship Ángeles Alvariño was launched. It belongs to the Spanish Institute of Oceanography and is equipped with the most modern navigation and location electronic systems, as well as the necessary means to collect samples, both water and sediments, determination of physical and chemical variables of seawater, as well as studies of marine flora and fauna. Advanced technology for the research of marine geology, physical and chemical oceanography, marine biology, fisheries and environmental control.